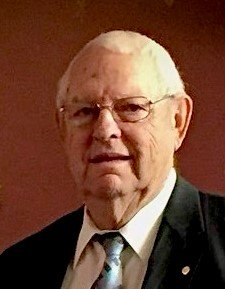 Mr. Poeppelman was a 1957 graduate of Fort Loramie High School. He then served in the US Army Reserves from 1958 to 1964. Bob retired from the Celina UPS hub where he had been a truck driver for 30 years without an accident. He also worked with Arling & Evers Auctioneers for 25 years. Bob was a member of St. Nicholas Catholic Church and the St. Nicholas Men's Society. He was also a past church groundskeeper. Bob belonged to the Minster Fraternal Order of Eagles and was a 50 Year and Uniform Rank Member of St. Michael's Knights of St. John. In his leisure, Bob enjoyed playing cards at E&R's, fishing, league bowling, golf and horse shoe.

Mass of Christian Burial will be celebrated 10:30 AM, Tuesday, December 22, 2020, at St. Nicholas Catholic Church in Osgood with Rev. David Howard presiding. Interment will follow at St. Martin's Cemetery. Friends may call Monday 3:00 to 7:00 PM Gehret Funeral Home in Fort Loramie. Due to recent local outbreaks of COVID-19, use of face masks and social distancing will be critically necessary at all funeral rites. Memorials may be made to Osgood Life Squad. Private condolences may be expressed at www.gehretfuneralhome.com.