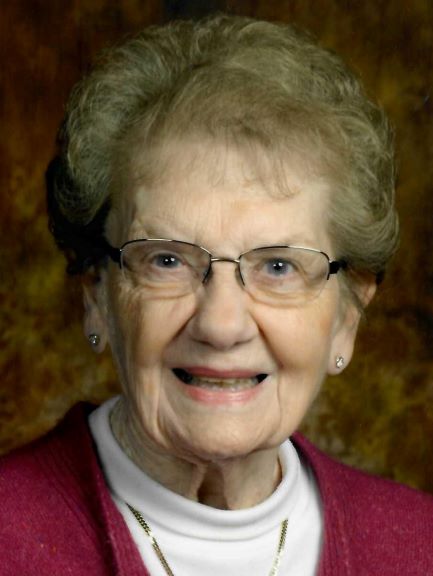 A 1946 graduate of Fort Loramie High School, Mary continued studies to become a registered nurse at Good Samaritan Hospital School of Nursing in Dayton. She retired in 1994 from Wilson Health Hospital where she had been employed 45 years as registered nurse. She was a member of St. Michael Catholic Church, St. Ann's Ladies Sodality, St. Michael C.L.C., the Minster Eagles Ladies Auxiliary and Fort Loramie Athletic Booster Club. Before moving to town, Mary & Lindy raised their family on the farm in St. Patrick and were members of St. Patrick Catholic Church where she served on the parish council and had been a lay communion distributor.

Mary enjoyed reading, traveling, crocheting and card clubs. Dedicated to her family, she especially enjoyed family visits, following her grandchildren’s school activities and keeping everyone fortified with their favorite cookies and ice cream.

A public Mass of Christian Burial will be celebrated 10:30 AM, Wednesday, October 7, 2020, at St. Michael Church in Fort Loramie with Rev. Steven Shoup presiding. Interment will follow at St. Michael Cemetery. Social distancing and masks will be recommended at all funeral rites. Live-Streaming of services may be viewed at www.nflregion.org. Memorials may be made to the Michael Hoying / Fort Loramie Fire Department Scholarship Fund, Wilson Health Foundation or charities of choice. Private condolences may be expressed at www.gehretfuneralhome.com.